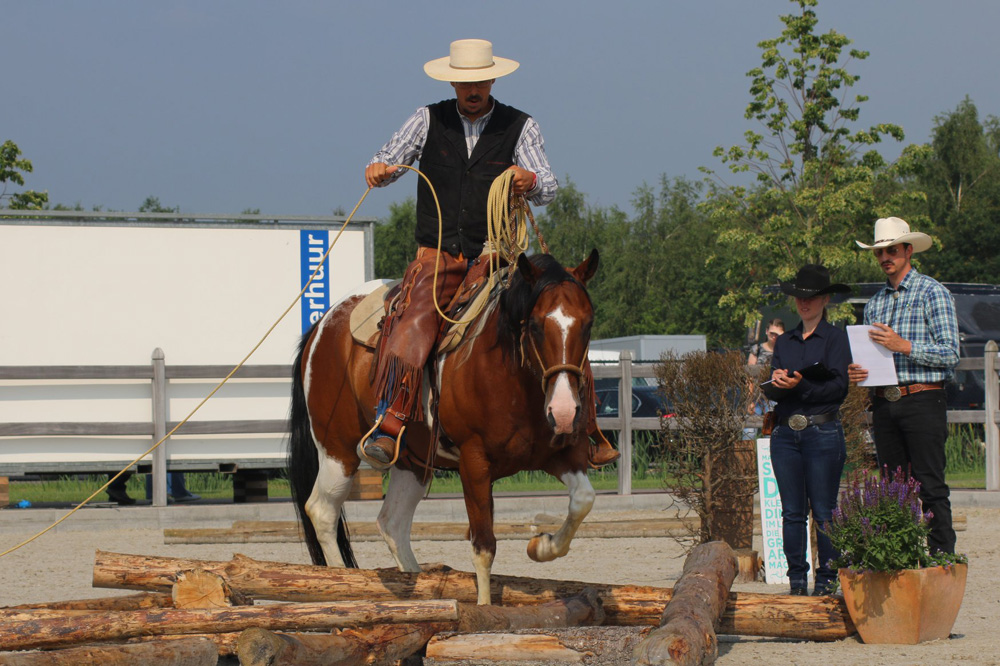 The origin of Ride West! lies back in 2015. Here the first contact between the Ranch Roping Team and Extreme Trail Pauwels was built. Klaus Wetzel recognized the similarities between both disciplines early and choose to come to the grand opening of Extreme Trail Pauwels. Even though there wasn’t much time for big plans on opening day and the exchange of business cards was all that happened that day, those big plans should follow.

In 2016 the first clinic with Klaus was organized: Extreme Trail MEETS Ranch Roping. In the morning the participants spent time in the challenging trail and worked on different obstacles. Slowly they were introduced to the highlights such as the suspension bridge and different water obstacles. On the second day the partnership between them and their horses was strong enough to ride all the obstacles they prepared the day before without any resistance. In the afternoons the participants spent time with Klaus and received a great introduction in Ranch Roping, learned different shots and could rope first dummies from horseback on the second day. Since this first combined clinic Extreme Trail MEETS Ranch Roping took its’ annual place in the clinic program.

Through Klaus Wetzel and some events, the contact to the rest of the Ranch Roping Team was built.

In 2018 we first had the opportunity to realize a combined competition between Extreme Trail and Ranch Roping at an expo: Vaquero Horseback Extreme Trail was born. As in other horseback classes in Ranch Roping, the competitors had to ride a pattern in which different dummies were placed and needed to be caught with different technics and positions. Some shots were combined with obstacles such as a water crossing or with a stop on different bridges. This cooperation was a true success and everyone, riders from both disciplines and the spectators were fascinated of this class. It’s a real multitasking challenge for horse and rider!

After this successful cooperation first ideas for a special event began to grow. It was clear that the partnership between horse and rider, that is needed in both disciplines should be in the focus. Nobody knew how fast those ideas should become reality…